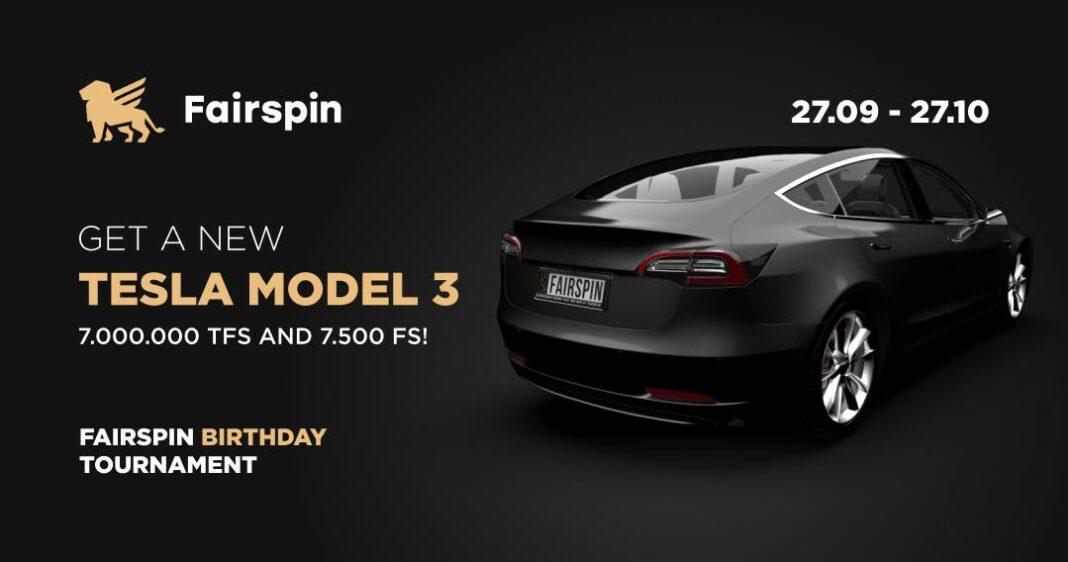 We are glad to announce the launch of the Fairspin Birthday Tournament, a large-scale tournament in honor of the birthday of our platform.

The tournament will be held from September 27 till October 27.

To make this event especially memorable for our players, we have prepared cool prizes for the most active ones. Celebrate with us by placing bets on your favorite games and have a chance to win:

The gifts don’t stop there. Everyone will have a chance to get one by joining the tournament!

The platform even prepared gifts for those who dont want to gamble. It is possible to get $1000 for following us on social media.

3. Prize places are distributed among the participants with the largest number of TFS mined via the P2E program during the tournament period.

4. Only registered Fairspin users can join the tournament.

The transparency of the results is guaranteed by the blockchain. All bets can be checked via Trueplay Explorer and be sure that the most worthy player will win.

Join the celebration and gain victory in this remarkable tournament!

Fairspin online casino was founded in 2018 and works under the Curaçao eGaming license. It is a fully transparent platform where every user can check their bets and other gaming actions through the blockchain. It became possible because of the Trueplay Explorer, which records all that happened at Fairspin and publishes it in Explorer.

Fairspin provides more than 5000 games by 70+ providers translated into 20+ languages.

The casino has its own digital asset – TFS Token. It may be converted from the gaming account, bought, sold on the exchange market, and received thanks to the special loyalty programs. We released a limited number of TFS Tokens, and we are watching to keep the stable course between TFS and USD.

There are two loyalty programs based on TFS Token:

Play To Earn – when users receive rakeback (refund from a bet) for bets in each game in tokens. They can send received tokens to the most profitable holding programs, sell them, or convert them to a currency account and continue to play. Hold To Earn – is an option to put TFS on hold and then receive a percentage of the casino income in tokens as a reward. There are three holding programs: 8 hours, 1 day, 3 days. The average APR of the Hold To Earn program can reach 535%. Moreover, it is fully safe, since even if the casino does not have income, the user will in any case receive all the tokens from holding.